â€˜I wonder how many of the present Malaysian politicians will be remembered for the good they have done in 10 years time and the sacrifices they have made for the country, not their children, wives, relatives, cronies, hangers-on, runners and other third parties who are multi millionaires, corporate and political figures â€“ sadly, not in their own right?â€™ â€“ Dr Jacob George

Something vulgar is taking place in Malaysia never seen in our nationâ€™s history! And we had a proud dignified history at that!

But all that was compromised after we had a dictator as Premier followed by a number of political weaklings some who allowed the nation governed by auto pilot and â€˜in-lawsâ€™ while another believes media hype and press statements stating what disfranchised Malaysians want to hear being palliated without real change being the answer to cries for change that one can really believe in!

But of late another twist had taken place where we seen political surrogates and mercenaries being â€˜employed or engagedâ€™ to manipulate, distort and even abuse logical thinking all for political expediency!

Even blatant seditious allegations and minority bashing being a hallmark and increasing!

Or acts of blatant corruption and abuse are seen in ‘racial lens’ – a stupidity of course, embarrassing the majority of right thinking Malaysians, universal principles of justice, law and order or the rule of law of a state!

We have seen a racist right wing repeatedly highjack national issues along racial and religious terms, even if they have no locus in all of those issue!

Boasting of millions of followers but we see barely a handful if any but that does not stop the spin being repeated!

On the other end of the spectrum we seen mercenary bloggers, even NGOs being roped in and shocking among them a consumer movement and we understand them to be party members with one eying a seat or a senator ship the next round?

I have always said if you have political ambitions leave the consumer movement.

Do not highjack the consumer movement for your political ambitions!

But the disturbing trend is when politicians abuse public office and its machinery for a political agenda which serves less than 4 million members if at all!

At a young age, 5 years old if not mistaken, where I had the privilege of holding hands with the nationâ€™s founding fathers who were close associates of my late grandfather an educationist in Sungei Petani, Kedah.

I had the joy of seeing them have meals cooked by my late grandmother followed through with lively political discourse and a round of cards which was always dignified and proper!

Laughter and jokes followed each round as tea, hot curry puffs, delicacies and Indian sweets were served!

There were no issues pertaining to food served and fellowship enjoyed!

Those were memorable times!

When they lost dear friends there was never hesitation to be part of the grieving friend’s family partaking and sharing in the grief!

They were simple, approachable and great men of faith and of politics rarely boasting and defending their religious convictions and creeds at each and every turn of their political life!

As a result even a 5 year old then, can remember his great times with these men and founding fathers despite the years gone by!

In fact, it was inexplicable that I again met the late founding father at Penang Medical Center in the 80s as a young man, this time and he wanted me to investigate an allegation, an infant died of famine in Lunas, Kedah!

He knew my investigative strengths as a researcher and my cordial ties with the media, even then.

I remember this fragile, frail but loving man look at me and say â€“ â€˜Hi, you are exactly your grandfather. Sudah kahwin? @Married?. Son, no one dies of famine in Malaysia let alone, Kedah @rice bowl of Malaysia. This must be made right! Can you do something?’

I rectified that allegation despite upsetting, my then employers who were behind that report and were furious at that time till I explained the issue and background to it all!

And the founding father was indeed happy.

I have fond memories of all of them!

I wonder how many of present day Malaysian politicians will be remembered for the good they have done in 10 years time or theÂ  sacrifices they have made for the country, not their children, relatives, cronies, hangers-on, runners and other third parties who are multi millionaires, corporate and political figures â€“ sadly, not in their own right?

Bravo – Oh Bravo! You have to hand it to Singapore authorities the manner they address and fight corruption whenever it rises its ugly head!

Singapore is unlike other countries who preach but do not practice, who scream religious values, ethics, governance, fair play but strictly omit doing any of them!

In fact, some have even set up third parties to ridicule whistle blowers and exposure of corruption along racial and racist lines!

Certain vernacular racist media and paid mercenary bloggers are recruited to fan the same arguments think all the world is as stupid as these groups are!

They have gone mentally bankrupt of ideas and excuses for runaway corruption at each and every tier of administration!

Even GOD is being bribed!

So I cannot but praise once again the nation and guardians of Singapore for the suspensions of the chiefs of the Singapore Civil Defence Force (SCDF) and the Central Narcotics Bureau (CNB) which had resulted from a probe involving the supply of IT-related products and services.

Though in this case, no money is thought to have changed hands, the close relationship between a certain female IT executive and the two senior officers was a cause for concern, and a complaint was lodged with the Corrupt Practices Investigation Bureau (CPIB).

According to The New Paper, the female IT executive developed a close working relationship with both former CNB director Ng Boon Gay, 45, and former SCDF commissioner Peter Lim Sin Pang, 51.

This relationship was enough to be a cause for concern.

The paper – AsiaOne pieced together various news reports to find out more about her:

She apparently works for a firm that supplies IT-related products and services to several government offices including MHA and SCDF.

While Mr Lim and Mr Ng were both unaware of each other’s dealings with the woman, they have both confirmed their relationship with the woman in statements to the Corrupt Practices Investigation Bureau (CPIB).

The Straits Times reported that both men admitted they had improper relationships with the woman in question.

An internal source had questioned whether correct protocol was being followed in the SCDF and CNB’s IT deals.

No money is thought to have changed hands, but the close relationship between the IT executive and the two senior officers was observed, and a complaint was lodged with CPIB.

A woman working for a top American multinational firm is helping in the probe.

The probe is believed to be related to tender and procurement processes.

Other senior SCDF officers and employees in private sector IT firms have also been helping in the investigations.

I wonder whether such actions will be the case rather than the exception or worst that a war on corruption or alleged corruption only targeted at oneâ€™s political opponents assisted by a trial by a racist media without any foundation or evidence procured while at another door real thieves are catering away the family treasures!

Three cases that are in my mind are one where in a certain country a politician is supposed to have made $17 million on a hospital sale changeover and in another case a private company being managed by internal preparation to be awarded a massive multi million dollar contract to manage and service hospital equipments and the third where prize assets are handed to cronies?

The story has gained weight within the last 96 hours – as I am advised that several independent candidates respected, well worth their salt and experience will take on the political establishment and incumbents at the coming GE in March 2012!

It is going to be interesting with the entry of the third force in major urban seats nationwide!

Massive funds and the might of the media controls will not give incumbents victory as we have a enlightened voter bank!

Neither the votes of suspicious individuals masquerading as Malaysians!

If the third party stands I am certain several BN component parties and even in some places the incumbent will fall as the Malaysian voters seems to have made up their mind to show they are the masters of their vote whether you give them RM500/-, RM100/- RM1000/- a new road, a bridge, a new school, a stadium or whatever infrastructure with various variation orders beefing up the cost which may collapse in the near future!

So getting a seat is not great and thinking just because you have already put up a shiny multi color banner wishing the Chinese a Happy New Year will give you victory â€“ you have thought wrong!

Strange in several seats I am advised those who lost are being returned as candidates even those with a dark side?

This shows their leadership lacks political imagination and guts!

Wonder where transformation fits into all these? 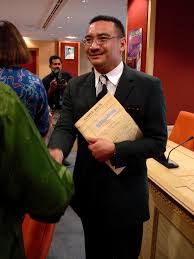 A dossier on all the exploits of Indian national Satyam Tadikonda @TVVS Swami has been handed over to HE the High Commissioner of India to Malaysia!

The said dossier contains records and evidence of the various Police reports and other allegations against this Indian national that has helped win him great notoriety in Malaysia!

The dossier contains enough evidence that has been collated from various sources and among them victims!

A similar copy will be handed to Malaysia’s Home Minister!

Like other notorious conman – Satyam Tadikonda had spared no one not even a underage young Malaysian lass or a divorced mother of three the latter forced to take a loan from â€˜Ah Longsâ€™ on behalf him and paying its price!

He even has the audacity to make threats at me and tell me in an email â€“ ‘I will come to Malaysia see if you can stop me!’

That email has been handed over to the authorities as well!

That is the arrogance of his character!

A television and several major newspapers in India are also desirous to get an exclusive on him which many groups and individuals in Malaysia have employed private investigators and others to track him and those who ‘aided and abetted him’ in these despicable acts down!