‘Maybe, I am reading far too much folklore and in today’s modern era of million ringgit deals, wives, girlfriends, mistresses, holidays, houses, lifestyles, Bentleys and private jets – I am sadly mistaken or am I?’ – Dr Jacob George

I am not the least surprised, that the well financially greased bloggers, cyber troopers, or our self righteous political puritans who cannot wait a second to upload spins and niceties to political benefactors even when they have royally cocked up – while pouring scorn on political opponents especially – ‘the politician’ who must be destroyed at all costs, whose name, I cannot mention have been rather conspicuously silent on the aftermath of the above matter and the Court of Appeal judgement!

No prizes for guesses, why?

I am more interested to know now whether we will now have a 7 generation curse on Malaysia because certain morons failed?

Maybe, I am reading far too much folklore and in today’s modern era of million ringgit deals, wives, girlfriends, mistresses, holidays, houses, lifestyles, Bentleys and private jets – I am sadly mistaken or am I?

So basically is this the truth?

That defenseless Altantuya brought herself to Puncak Alam, shot herself in the forehead and then blew herself up!

Once again, we make the headlines across the civilized world for the wrong and vulgar reasons!

And to the politicians, which includes, a deputy minister, IF you do not know ask, do not shoot your mouth off, IF you cannot support or comprehend your newly minted role – get out and do not embarrass the government and the man who appointed you!

A bunch of cyber troopers and arm chair critics writing under the ‘security and safety’ provided by the very Malaysian Police force they are ridiculing have made several idiotic statements against the Police over the shooting of criminals in Penang!

Their comments and statements are far too simplistic to basic lunacy showing clearly they lack neither the data, intelligence or in-depth knowledge of the issue discussed at length!

We can go on and discuss all shades of the criminal law and due process but the fact remains ‘on the street and in life and death situations’ one may not have that luxury to check the statutes before engaging an enemy of state!

So these comments that so far light up the comments columns under pseudo names are all basically – ‘hot air, innuendos, political intimidation and character assassination!

The fact is, no operation is planned without taking cognizance of the threats and available intelligence gathered!

At the same time no operation is 100% safe for assets taking part in the said detail.

We are not dealing with novices, school boys – but armed, highly trained and vicious operators with a track record of murders!

The truth is, when our Police assets are on the ground, facing a ‘life and death situation’ it is not so easy as stated by these idiots in their many comments!

Sadly, the man and women in blue who put their lives on the line to protect us at ‘seconds notice’ do not have the luxury to conduct executive briefs for the many individuals hiding behind pseudo names and making derogative statements on many matters of internal security, raids and Police response strategies and actions!

That includes politicians and certain solicitors who have made a ‘career and wealth’ from their sine biotic relationships with the scrums of society!

They know who they are and I need to go no further!

The truth that is over shadowed here is, that fact that these were individuals who were members of criminal gangs, enriching themselves through drug peddling, assassinations, prostitution, robberies, kidnappings, arms smuggling, intimidation and underworld activities!

And yes just as their victims were – someone’s husband, son, brother, father it is a fact there these criminals also had families who by their statements give an impression they were oblivious to their alleged links to crime!

To every mother and wife – certainly their son and husband is an honest man devoid of any defects – even when in the past, we already have photo fits and CCTV recording that clearly identifies them?

Or worst – the funeral procession and activities therein, other circumstantial evidence clearly denotes their involvement in secret society activities?

But what was not getting reported in the cross fire of media journalism – is what I found out at ground zero and moving and interviewing a wide range of personalities – tourists, professionals, ordinary men and women, business and retail outlet owners, night market operators, and ordinary Malaysians over 5 days – that they were indeed grateful that the Malaysian Police have responded to the spiraling increase in criminal activities in the country!

They are glad that they may now go out and have supper, go pump petrol at a nearby petrol station, go withdraw money from an ATM machine or just enjoy a walkabout in a busy street without being a victim to all kinds and shades of crime that had captured the front pages of our electronic, print and alternative media of late and the wanton loss of innocent lives!

The most beautiful among us, is he who suffers silently, speaks the language of kindness, of moderation, loves the ALMIGHTY, his neighbors, lives humbly and has the elegance of simplicity!

But everywhere I turn and look – East – West – North – South – developed nations, developing nations, emerging markets – it is the very opposite!

To regain my ‘sanity and composure’ – time to go out for a walk, with my dog, Kirara!

‘Any act of attacking places of worship of innocent minorities is vulgar, horrendous and simply unacceptable in any religious, law abiding and civilized populace! This is a barbaric act nothing more nothing less and has no place in any religion or religious creed and in today’s modern global village!’ – Dr Jacob George

It is a fact that Christians, make up around 10 percent of Egypt’s population and they have long complained of discrimination and periodic violent attacks by extremists.

However, since the ouster of Mohamed Morsi on July 3, the number of recorded sectarian incidents has dramatically increased. 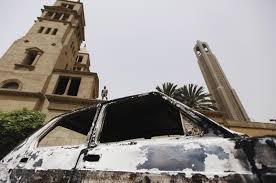 Security forces moved to violently disperse two protest camps by supporters of ousted president Mohamed Morsi in Cairo on Wednesday morning, setting in motion a day of deadly violence that left at least 525 people dead in clashes across the country.

Amid the violence, alleged Morsi supporters carried out on dozens of attacks on churches and Christian-owned properties throughout the country.

Mina Thabet, an activist with Christian rights group the Maspero Youth Union, told Al Jazeera on Friday that at least 32 churches had been “completely destroyed, burned or looted” in eight different governorates over the previous two days.

The group also recorded dozens of other attacks on Christian-owned shops, businesses and schools around the country.

The Anglican church of St Saviour’s in the city of Suez was one of those attacked on Wednesday.

It is stated that the church was attacked with Molotov cocktails and stones, and the car of the priest was completely destroyed!

According to Egypt’s Anglican Bishop, Mouneer Annis – Two other churches in Suez were completely burned – and the thugs looted the churches afterwards. It’s a mixture between burning and looting we are told!

According to the Bishop, it has never happened before in history that such a big number of churches were attacked on one day though there were sporadic attacks once or twice a month!