Consumerist: As We Mourn The Lost Of Innocent Lives In Peshawar & Kenya – We Say No To Killings In God’s Name!

We show solidarity with the people in mourning and in view of both tragedies happening, we should all share this as a response to the evil that people do in God’s name!

We say to them – You do not represent us nor God in what evil you do in both our name!

God is Love – God is Good – and – only God can give life and take life!

Is the Malaysian government not the lest embarrassed to state so publicly that the highest earning 40 percent of the country’s population is currently enjoying nearly 80 percent of the subsidies rolled out by the government?

Yes, that was what Deputy Finance Minister Ahmad Maslan stated:

“The richest 40 percent are enjoying 80 percent of the subsidies,” said Ahmad, who reiterated that the subsidies are not very effective in reaching its targeted group.

I just wonder who is the highest 40 percent referred to – can we have a Royal Commission on this?

So there is sheer abuse!

Now we know why targets are never met and subsidies and handouts will go on for ever and ever under perverted and vulgar justifications!

‘I smell something irregular and foul in this!  What do you smell?’ – Dr Jacob George

I have said this a million times – since 1994 that it is plain profiteering for local councils and private operators in each district to have their own cost tabulation on parking or now the latest gimmick – to print their own parking coupons instead of having one general pricing and coupon in a state such as Selangor!

Why cannot we have a standard parking fee and standardized coupon that can be used in each respective state in-between districts or councils? 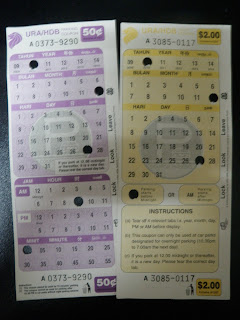 Singapore a nation with so many local councils has only one general set of parking coupons (see above) and if there be the coupons may differ just on pricing basically short haul or long haul parking!

In Selangor – the brilliant minds behind this stupid and idiotic venture has decided that each local council area must have its own versions!

So Consumers will have to buy a few different sets of coupons at a time when they are already struggling to make ends meet with increasing price of goods and services and now this rather insensitive venture!

It looks like the crony who has secured the parking tenders will be laughing all the way to their banks – and that is the now a Malaysian way of life!

I smell something irregular and foul in this! What do you smell?

According to friends living in the area suicide bombers detonated their explosives outside a historic All Saints Church in northwestern Pakistan today killing over 60 people in the deadliest-ever attack on the country’s Christian minority!

The bombing in Peshawar, is reported to have wounded another 120 people, underlines the threat posed by Islamic extremists as the government seeks a peace deal with domestic Taliban militants.

It will likely intensify criticism from those who believe that negotiating peace with militants is a mistake.

The attack occurred as hundreds of worshipers were coming out of the church in the city’s Kohati Gate district after services to get a free meal of rice offered on the front lawn!

Like all aftermath of such heinous and crime against humanity – survivors were reported to have wailed and hugged each other in the wake of the blasts.

According to my priest friend the artistic white walls of the All Saints Church were pockmarked with holes caused by ball bearings or other metal objects contained in the bombs to cause maximum damage.

Blood stained the floor and was splashed on the walls. Plates filled with rice were scattered across the ground.

The blasts killed over 60 people and wounded another 120!

We are informed that at the nearby hospital in Peshawar the victims were being treated.

Sadly like all such cowardly attacks against soft targets the dead included several women and children!

I just beg to ask these blood thirsty animals:

What have these people done that demanded such an attack? And why are they been killed?

Someone, somewhere got his theology all totally ****** up!