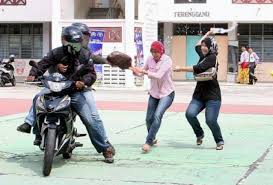 Consumerist: Another Murder, Another Carjacking, Another Snatch, Another Robbery – Welcome To Safe Malaysia? 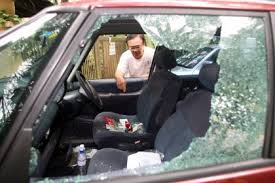 I had received this note from the victim who is the administrator of my church office and very decent and caring individual.

He loves this country and everything in it but what happened Sunday April 21 changed his perception like it has millions of others!

Just want to let you know that this morning (Sunday), while I was driving to church, at about 7.10 am I was robbed at the LDP Highway, just after the Sri Damansara toll going towards PJ.

About 1 km after the toll, suddenly I heard a loud noise in my car and I realized that I was hit from behind. I knew it must be quite serious and I quickly stopped on the side of the highway to investigate.

I saw a Pronto Waja stopped behind my car and suddenly, one guy was wrapping his hand with his jacket running towards me and wanted to hold me and kick me. I quickly ran and at the same time another guy went inside my car and drove off.

They were in a group of 5 Indians.

I heard many times of similar cases but I did not expect this will happen to me too.

Luckily, I was not hurt but I was terribly shaken. Praise the Lord.

Thanks to another Indian guy who was riding his motorbike behind my car.

He saw the incident and he gave me a ride to the nearest police station. He himself was injured on his right leg (bleeding) as a he was hit from the broken pieces from my vehicle.

I wanted to give him some money to see a doctor but he refused to take my money.

NEVER STOP YOUR VEHICLE IF IT IS HIT FROM BEHIND WHEN THERE IS OBVIOUSLY NO TRAFFIC JAM.

Below another robbery of a Malaysian Doctor At Shell Sg. Ara Caught On CCTV – Are These Robbers Still Out There Awaiting Their Next Victim?