‘Basically the ordinary men and women are totally screwed and helpless and there are no words of comfort from those we look up to – only foolish and idiotic statements!’

By now I am certain the diplomatic advisories have already gone and arriving tourists to both Singapore and Malaysia turned off with the latest tourist attraction – haze – thanks to our good neighbor Indonesia!

While politicians from across the causeway have screamed, approached the comatose ASEAN secretariat, looked at provisions at both diplomatic and international law to address this trans-border hazard which comes on a yearly doze, the residents from both jurisdictions suffer!

It would not be mild to state that both Singapore and Malaysia could face a bigger economic impact than from their worst air pollution crisis 16 years ago if slash-and-burn fires in Indonesia continue to rage in the coming weeks, continues to turn off tourists, cause major health hazards, economic losses and extreme anger towards Jakarta’s handling of this menace!

Restaurants, tourist attractions, popular beaches and spots and some other businesses are already feeling the pain as haze envelopes the area! 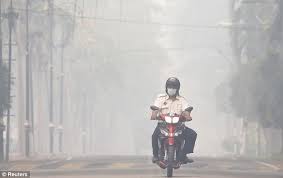 For the record, if I remember correctly, the haze crisis in 1997 lasted about three months and cost Southeast Asia an estimated $9 billion from disruptions to air travel, health expenses and other business impacts.

Analysts, political commentators, consumer advocates and economists and businesses say the costs are already mounting about a week since air pollution levels in the countries shot up to unhealthy and sometimes hazardous levels.

In many areas sales fell around 40 percent in the past week! 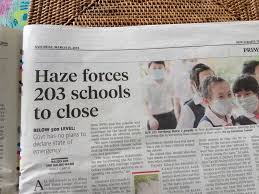 It is not encouraging to hear that today much depends on how long the haze lasts and which way the wind blows the smoke that is coming mostly from fires set on palm oil plantations on Indonesia’s Sumatra island.

Now we are told by political morons and idiots that we need to wait for the rain?

I predict that thanks to Indonesia the haze this round could be worse than in 1997 if the haze drags on.

You must remember that in 1997, the level of pollution was not this severe, and on the other hand the tourism industry’s contribution to the economy was relatively smaller back!

Tourism makes up 6.4 percent of Malaysia’s economy and about 5 to 6 percent of Singapore’s. Analysts see that sector taking an immediate knock, even if they cannot quantify the damage.

Today clear skies and relatively little pollution, would be a miracle!

I do not know about Malaysia whose ringgit is taking a free fall and consumers are hurting!

Singapore on the other hand, and its $271 billion economy cannot afford a big hit from a prolonged pollution crisis or any loss of confidence.

The economy – which is dominated by services, followed by manufacturing and construction could be hit!

In the meantime, hospitals and clinics in areas badly affected by haze in recent days had recorded a rise of more than 100 percent in asthma cases!

Basically the ordinary men and women are totally screwed and helpless and there are no words of comfort from those we look up to – only foolish and idiotic statements!