I have just come from meeting many grassroots groups and close NGO leaders in the area at our usual eating outlet.

No, I am a poor consumerist and cannot afford the eating and drinking holes of the ‘other side of bourgeoisie bloggers’ who are well financed and fed!

So our meeting places are basically stalls, middle class restaurants and kopithiams!

But the fact that we have uncovered today is IF there is a contest for the massive number of expensive, colorful, high quality posters and multi designed banners, it is a free fall, the unanimous decision is Caretaker Federal Territories Minister wins with a massive landslide!

They are all strategically positioned and replaced in regular intervals.

Sometimes you can also get confused whether caretaker premier and his deputy are standing in Pantai in view the huge billboards of them too in key areas – around the wet market, temples and religious houses, key road junctions and public gathering sites.

In contrast, the number of posters of incumbent MP Nurul Izzah Anwar around the same area is shockingly few and questions are already been asked why? 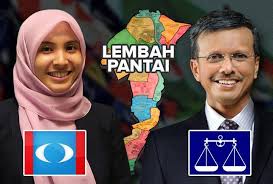 Is she not the candidate and incumbent defending this rather highly explosive seat?

Or am I wrong?

Are Posters been put up only to see them removed or ruined by ‘over eager and stupid individuals’ – so stupid that they make Malaysians look pretty stupid and silly in the eyes of foreign wire representatives and independent minded individuals?

Or is the incumbent really cash strapped, so much so, now NGO and other people power groups may in the next few days need to finance campaign posters and insignia on her behalf to close the huge gap in exhibits?

After I am told this afternoon by a strange mixed group of constituents – that she is the ‘darling of the voters’ whatever said and done?