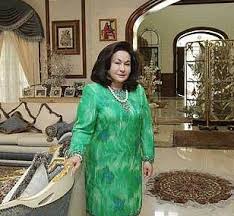 ‘Premier’s wife Rosmah Mansor maintains and I concur that violence against women must be addressed as it will have a negative impact on the family institution and can disrupt a country’s economic agenda bring all forms of trauma on the family and household!’ – Dr Jacob George 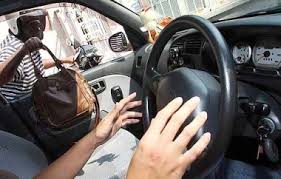 Rosmah Mansor the wife of the Premier had stated recently that an average of nine cases of domestic abuse and sexual assault have been recorded by police each day since 2010!

She continued that based on the latest police statistics, they found that there have been 9,314 domestic abuse and sexual assault cases since 2010.

Rosmah felt that this statistics must be shared is because violence against women is a universal problem that cuts across region, religion, race and culture and affects women across the globe. 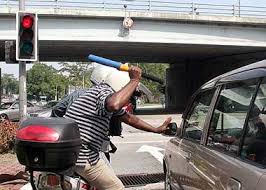 I fully agree with Rosmah that violence against women must be addressed as it will have a negative impact on the family institution and can disrupt a country’s economic agenda bring all forms of trauma on the family and household!

Is it time we include in this statistics victims of robberies, assault and other forms of crimes which includes grievous bodily harm, rape, sexual crimes and murder?

I do not deny that the government has taken various initiatives with statutes amending the Domestic Violence Act, the Employment Act and enacting the Anti-Human Trafficking and Anti-Migrant Smuggling Act, to further strengthen the laws to protect women in Malaysia.

I am aware that 2,252 women, who were victims of human trafficking, were rescued between 2008 and 2010 under the Anti-Human Trafficking and Anti-Migrant Smuggling Act which must be lauded! 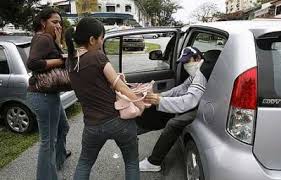 But I maintain like Rosmah cited that improvement in policies and laws would not address the problem of domestic violence or other violence on women in a holistic manner without the enforcement of other mechanisms.

We need an holistic and professional response on all forms of violence against women especially at recent spikes on robberies, rapes, assault on women!

Beyond that, daring robbers on motor cycles carrying assault weapons smashing car windows to rob victims is too common a scene these days and they are mostly women who end up as victims.

These robbers ramble through shopping malls, streets and isolated areas to look for their victims. It seems like it is no more secure for women to drive these days.

Many of these helpless women have even been injured, killed or raped.

Last Saturday February 23 at around 8am at SS3 PJ, a woman and her daughter walking towards her car were nearly robbed by 2 Malays working separately in 2 motorbikes but in unison!

The victim to be was observant and noticed the movements of these two targeting her and her child as they came out of a restaurant walking towards their car parked nearby!

They avoided the trap set for them running into their car locking and getting away!

Many others have not been so lucky in SS3 Petaling Jaya, Sungai Way, and others parts of the Klang Valley as our women folk (mothers, daughters, wives, grandmothers, Aunties, Godmothers, Nannies) who go out marketing, shopping and performing household duties early on Saturdays and Sundays and become soft targets of an organized group of either 2 Malays on motor bikes or several Indians in a broken Proton Saga or other vehicles.

I am advised of many such thefts and attacks going now unreported as the public are quick losing faith in our enforcement and preventive manoeuvres!

When individuals eventually loss faith and confidence what is left? 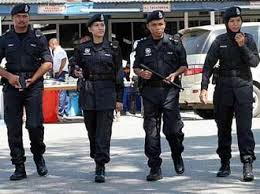 To date how many robbers have been shot dead or arrested?

To date how many carjacking groups have been arrested or shot to death in high powered operations?

Is it not time that we decided to shoot robbers and others dead who target our women folks or other soft targets instead of arresting them?

The attempted victim of Saturday Feb 23/2013 was lucky this time but she too was a victim in a earlier robbery by 2 Malays on Motorbikes at a Shell Petrol Station in Sg.Ara, PJ CCTV recording uploaded here