‘On two counts if this report is true it is a great misdemeanor when someone who has infuriated inter ethnic conflicts against a minority race who have been one of the backbones and partners of Malaysian struggle for independence and the national’s economic and development to this day!’ – Dr Jacob George

I am really disturbed to read that controversial Ridhuan Tee Abdullah was assigned to teach ethnic relations to this nation’s future military leaders?

On two counts if this report is true it is a great misdemeanor when someone who has infuriated inter ethnic conflicts against a minority race who have been one of the backbones and partners of Malaysian struggle for independence and the national’s economic and development to this day! 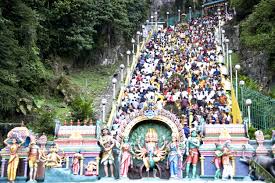 His statements contained herein is now a major controversy which has hurt the feelings of Malaysian Indians!

Secondly it is of utmost importance not just for dignity, decorum and professional credibility of a course and with the nature of the audience in attendance ‘care and concern’ must be the order of principle in employing any to teach future leaders of a strategic ministry such as defense!

I am certain former RMC students would know what I am talking about and referring to!

In this case there are allegations that complaints have been received from students, including Malay students, about the sensitive things that is mentioned during his lectures?

Has there been any formal investigations or is he another of the so special breed of Malaysians who can stroke incitement and hurt the religious feelings of minorities and get away?

There are also now allegations of other improprieties and this has to be investigated to protect the credibility and sanctity of academic standings and positioning!

And who is this Minister alleged to be protecting him?

I am certain Malaysian Indians need to know this immediately, if true, in view of the forthcoming General Elections!

However I must congratulate the far sightedness of Sinar Harian who had on the same day apologized for publishing the provocative article written by Tee, an associate professor at the National Defense University (UPNM).

The apology was relayed by the paper’s editorial adviser, Abdul Jalil Ali in front of people who had gathered at the publication’s headquarters to protest that article!

However, I notice that Malaysia’s version of the racist ‘Klu Klux Klan’ who for some inexplicable reason were silent on events in Lahad Datu, Sabah have emerged from their slumber and made a statement defending Tee and raising by a few notches by again making a seditious speech which threatens minorities!

The fact remains this group today does not command the kind of political strength they masquerade thanks to the political, social, religious and economic transformation Malaysia has had since GE12!